After taking off my winter tyres (what winter?!) I needed to buy 5 summer tyres having sold my Dunlop run-flats last year.

The thought of the cost of 5 new performance tyres was worrying me until these were recommended to me. Having read some reviews on-line, and THIS ONE in particular and then discovering the price, I went ahead and had five fitted. I've not been disappointed so far, and on the basis of the reviews have high hopes. These are Nexen’s flagship tyres.

I went through a similar process when I bought my winter tyres, and despite some people telling me to steer clear of any tyre from Taiwan (and some even Nankangs in particular) I have not been disappointed with the SV-2s purchased. So confident was I in their performance I even bought Jodi and Jaime sets for their cars.

A bit disappointed we haven't had the opportunity to try them out in snow and ice, but in all other respects they have performed well, and I see them lasting us another 3 or 4 winters, if not more. Again, at less than £60 a corner. The deciding factor for me was not how they compared when reviewed against premium winter tyres, but how they performed against the summer tyres I would probably have left on given the high cost of premium winter tyres (which also at the time were like rocking horse shit!)
Posted by Old man, big kid at 09:20 0 comments

Look! No cables to be seen! Pretty much everything out of sight on shelf under the desk (modem. router, mac Mini, external drives and all that associated spaghetti of cables!


More pics to follow as still more to do
Posted by Old man, big kid at 06:42 0 comments 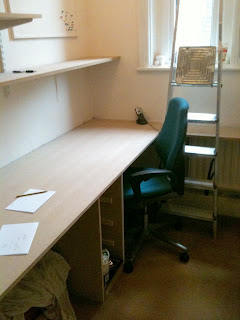 Decided it was about time I modernised the study. It was looking very tired and cluttered. Stripped out all the old shelves and surfaces and constructed from new. Includes space and runners to take four IKEA storage trays underneath, A lot of varnishing to follow.  Pictures of finished room to follow (when finished!)